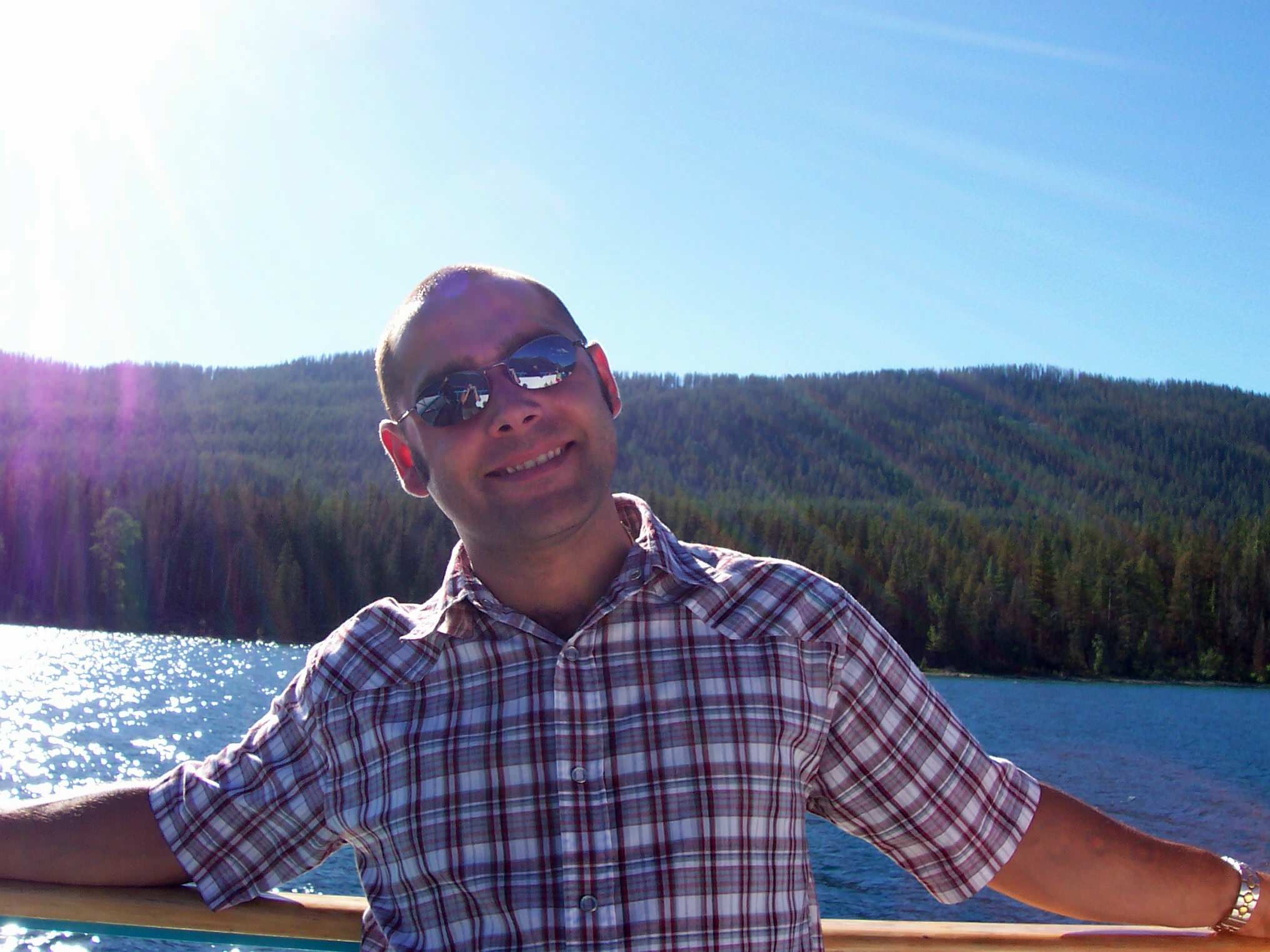 *Author’s Note: This is the third eulogy I wrote. This is the one that sealed the deal for me in fully being aware that this was my calling. Using my skills of writing and public speaking along with my profound personal experiences and compassion, I knew this is how I was meant to serve my community. This is an excerpt from the celebration of life for the man I married- the man who rushed home to pick me up off the floor when I got the phone call that my grandma died suddenly eleven days before our wedding, the man who willingly left our amazing wild west life in Montana to move back to Wisconsin with me when my Papa got sick, the man who gave me the gift of motherhood, the man who was my best friend and partner in life. While our marriage sustained only one whirlwind decade, our friendship and co-parenting dedication to our son remained forever strong.

His service was such an important experience for me, for our son, and for all who attended. I needed to honor this man. I needed my son to see his dad’s life be celebrated. The service had to be full of personalization, meaning, love, and ultimately him. His personality and spirit needed to shine through. I believe I accomplished this with the words that were said, the songs that were played, and the poem that was read which had been part of the Matron of Honor’s speech at our wedding. My main concern for was my son to have the solid first step on his grief journey that he needed. I think because Brian was so young and this was such a different grieving experience for our family that, to my surprise, I helped more than just my son. We are more accustomed to losing someone when they are old, but to lose a young man, this made everyone evaluate their own mortality in a new and very real way. I knew how much I needed this service, but I was shocked when a family member approached me after the service to express condolences and he told me, “We all needed this. I needed this.” One of my newer friends who had never met Brian also approached me and said, “From your speech I feel like I knew him. Thank you for that.” I was stunned. I was also gaining clarity. A meaningful celebration of life is imperative and experiencing it helps each person in a unique way. And I needed to be a part of helping other families experience this. I need to…because I feel it in my very being…and because I told Brian I would.

The week before our wedding I gave my grandma’s eulogy. The next Saturday Brian and I stood up there in the same church and got married. It was the ultimate testament to life goes on. On the drive from Montana to Wisconsin for her funeral, we were somewhere in South Dakota and I turned off the radio, grabbed a notepad, and started writing. It all just came to me. Brian often said how impressed he was that I wrote something so beautiful and all-encompassing for GiGi while sitting in the truck.

Just over two years later I was giving another eulogy for Papa. I found my quiet time to write and it all just came to me.

This time it’s different. It seems wrong. This shouldn’t be real. I don’t want the responsibility of summing up his all too short life. I couldn’t find my quiet- maybe because I have a 7-year old, and it didn’t just all come to me. If I keep the memories safe inside me and not share them, then maybe this isn’t really happening. I know that reasoning is flawed, but I don’t know if reason has anything to do with it.

The day after Brian became an angel, Easton told me that he texts Daddy in his head now. I said that great! Keep doing that. Then, he told me some things Daddy and God are telling him, and no 7-year old is making this stuff up. It’s remarkable! So, last night as I was getting nowhere with writing this I tried texting Brian in my head. The response I received was- tell Easton the stories, tell everyone the lessons. Ok, Bri.

So, Easton will hear the stories many times over of how his dad grew up. He will hear the stories of how after a year of being my neighbor Brian finally asked me out one day and then moved to Montana a week later. And how we were young and fearless and a little stupid and made it all work and had a very adventurous decade with cross country moves, vacations, houses, dogs, and finally our precious baby boy.

Brian thoroughly enjoyed a very eclectic mix of music and movies, and there’s much for us to learn from them. The opening and closing songs for this service are from one of Brian’s favorite albums and they give us very meaningful messages. A quote from another song by this band, the Eels, is “Wake up the dying. Don’t wake up the dead. Change what you’re saying. Don’t change what you said.” We never know how much time we have or what tomorrow will bring. It breaks my heart when I think of all the things Brian still wanted to do, all the things he had planned and won’t ever get the chance to accomplish. The lesson we learn from this isn’t new. We’ve heard it before, but Brian wants it to sink in more this time. Don’t wait to start living your life. Go. Do. Be. Because our time here is precious and fleeting.

The next lesson we learn is from Neil Diamond. “Good times never seem so good.” As I look back at the years of struggles and time of triumphs, the hours of sadness and the moments of pure happiness, the good times stand out the most. I’m not talking about the amazing times- the big vacations or new houses. I’m talking about the purely good times. Eating dinner together, sitting in the back yard, laughing at things only we think are funny, and I keep going to the time we were all sitting in the garage on a summer night listening to Richard Cheese and teaching Megan how to running man. Neil was right- good times never seem so good in the moment, but looking back the good times mean the most. They were the times we were living in the moment and enjoying life. We all need to do that much more often.

Out of the crazy mix of movies he loved, Emmett Otter’s Jug Band Christmas was one of his favorites. It shows he had good, simple values and a very big heart. The name Emmett was actually on our short list for naming our son, but then my sister Janel informed me that she’d call him Emmett Otter Jug Band Christmas Stiner, and we took Emmett off the list. It just dawned on me that Emmett’s dad had passed, and Emmett and Ma Otter just have each other and they work through life together, and everything is ok. Life goes on.

Brian was a simple man. He was very handsome and hard-working. He was perpetually tropi-tan. I was a bit hard-pressed to find pictures of him with a shirt on. Easton affectionately calls it tummy time with Daddy. He loved to cook and grill, he thoroughly enjoyed caring for his lawn, watching the weather roll in, and putzing in the garage. He was a social butterfly, and while often a man of few words he could go anywhere and make good friends. He adored being a dad.

When Brian first moved to Montana after our one week of Rock Fest, tubing the Chippewa River, hiking Big Falls, and enjoying every moment, he had a dozen red and yellow roses delivered to my house. It was the first and only time I’ve ever had flowers delivered to me. I have sixteen roses up here today. One for each year he was in my life. Eight red ones for the years we were married. Eight yellow ones for the years we were friends. Sixteen years went by too fast. On the tables we have Peace Lilies because…life is too short to not have peace in your life. The other centerpieces I chose because long before our baby and before our fur babies Brian and I had a plant- and his name was Ralph.

At the beginning of Brian’s illness just before his surgery there was so much anxiety and fear. Brian called me. I told him I had just downloaded the Daisies of The Galaxy album, and he knew exactly what song I was listening to. Brian would’ve played it without any apology, but I’ll radio edit it for you today. This sums up how I feel. “It’s a mother being here without you. Thinking about the good times. Thinking about the bad. And I won’t ever be the same. I won’t ever be the same.” Thank you, Brian, for all of it.

I asked Easton the other day if he wanted to say something at Daddy’s service. He replied, “Daddy told me I would.” I asked him when did Daddy say this? He said it was that same day. Brian had passed two days prior. I asked what did Daddy tell you? Easton said that Daddy said at the party where we’re all going to say nice things about him that I’m going to talk into the microphone. I had never said anything about a microphone. Easton would like to say the final prayer, a toast to Daddy, a quote from George Jung in a movie that Brian liked.

May the wind always be at your back

And the sun upon your face

And may the wings of destiny carry you aloft

To dance with the stars.